Today was an awesome and random day! We decided to stay a few days in Da Nang as there was a few things that were recommended to visit while in the city. One of which being ‘The Golden Bridge’. We hadn’t done a lot of research about it but knew it was a huge tourist attraction. We put it into google maps and ended up at the wrong place, for anyone that uses google maps can understand the frustration with the app sometimes. We asked the guy at the security gate to where ever we were for help and he gave us the correct directions. After back tracking 9kms, we pulled into a huge parking lot that had the name Sun World, so we were confused cause it seemed to be an amusement park. But everyone we asked about the bridge kept pointing us in the direction of the cable car across the lot. So we parked our bikes and headed that way.

When we got to the ticket booth, the cost was 700,000 vnd per person which is roughly 40$ cnd. Whoa! That’s a huge cost for us and normally we don’t pay that much for an attraction but we had come all this way (an hours plus drive out of the city) so we went ahead and did it. Seemed a bit steep for just a bridge, but oh well, off we went.

Some signs pointing us in that direction had English, some didn’t, so we just kind of followed the crowd looking for food on the way cause we hadn’t even had breakfast before we left, thinking we could grab something on the way but due to getting lost it put a bit of a twist on our day. Nothing really substantial to eat and when we asked staff they said there was food at the top which seemed a bit strange to us that there would be food at the bridge on top of a mountain, but anyways we just kept going walking through some interesting buildings and along some beautiful paths lined with ponds and cool structures.

We hopped on a cable car that felt never ending. Turns out, without knowing, we were actually on a cable car that holds the Guinness world record for the longest non-stop single track cable car that runs almost 6kms in length. With such amazing views above the thick, green forest, you have a great shot of Da Nang and the waters surrounding it. You actually pass hotels being built, a roller coaster through the jungle, large marble looking rocks and beautiful waterfalls, it is absolutely stunning. What made it so amazing for us was that we didn’t expect anything so we were blown away by everything. 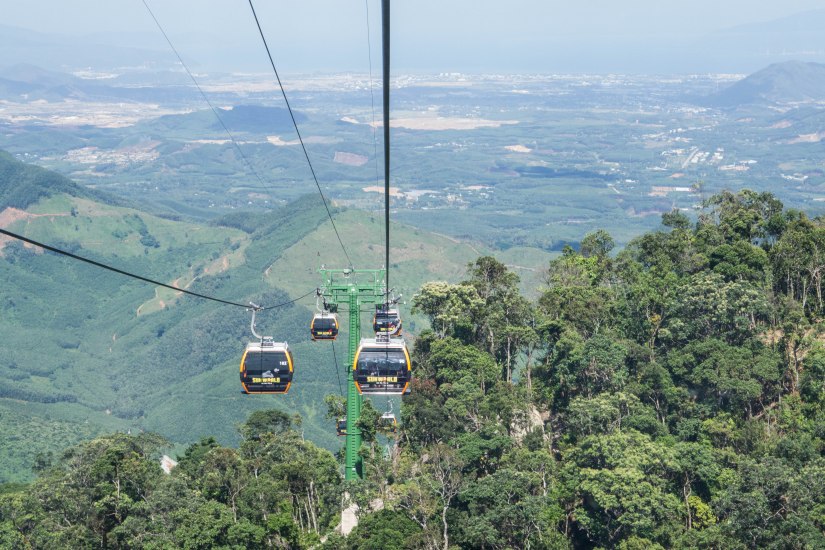 When you get to the top you arrive right at the beginning of the Golden Bridge, which is everything it is chalked up to be. It almost looked fake like in the pictures on google. The glowing gold of the railings and the two large stone hands holding the bridge up within its palms looked like a painting. I had never seen anything like it. 150m in length, this pedestrian bridge loops around to connect the cable car with the Ba Na gardens that we knew nothing about. We crossed the bridge over to the gardens and walked through in awe of the beauty that surrounded us. Several flower gardens, beautiful archways to walk through, stone limbs and heads and a large white Buddha at the bottom of the stairs. Everything was french themed as the area was founded by French colonists in 1919. 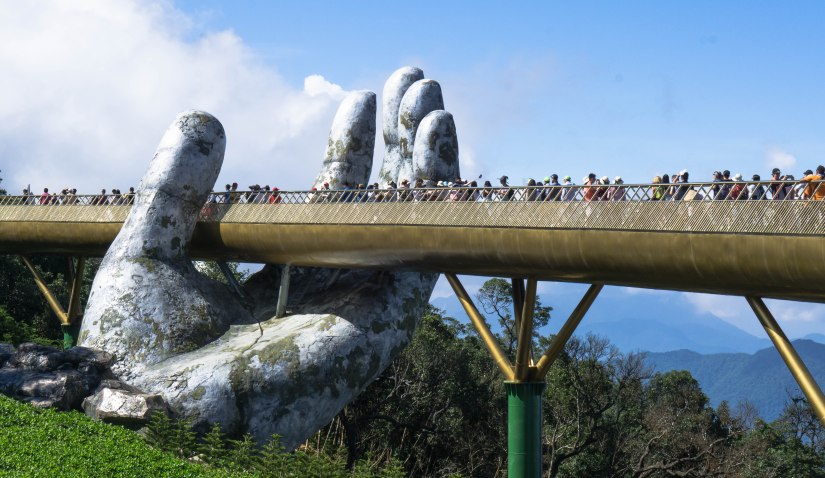 We walked through the gardens, took some photos, some people even took a picture with Mark. No idea why, maybe they thought he was celebrity, who knows.

The stone sculptures were very beautiful around this area, placed in every corner you go around. Seemed to be keeping with the Golden Bridge theme. There was so much to look at and take in, it was very overwhelming considering we had no idea what we had stumbled upon. We came across a large white Buddha, some pretty amazing dragon railings and beautiful flower gardens at every turn. 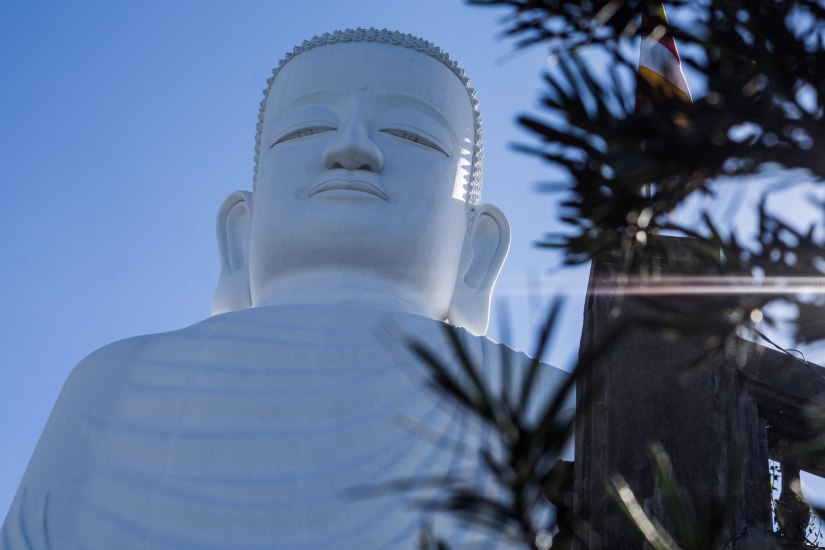 Mark had heard someone talking about taking another cable car up to the French Village where the food was so we headed that way cause it was 2pm and we still hadn’t found any food to eat. We took a shorter cable car ride up to another area and when the doors opened i felt as though we had walked into Disney World. There were lots of restaurants lining this area, cute little statues in the middle of a large square and some people dressed up as Aladdin and the Genie doing a dance to songs from the movies. Can i remind you again that we had NO CLUE where we were, how we missed this when researching the bridge and how random this entire day was to us. We couldn’t stop laughing as we walked around on top of a mountain, in the middle of the jungle in Vietnam, saying to each other, “What the heck is going on?”

There were actors on stilts and in extravagant costumes walking around taking photos with people. The square kind of reminded me of walking around Harry Potter World at Universal Studios, it was a bit medieval and dark looking with lots of little side streets and signs pointing in many different directions towards other attractions. 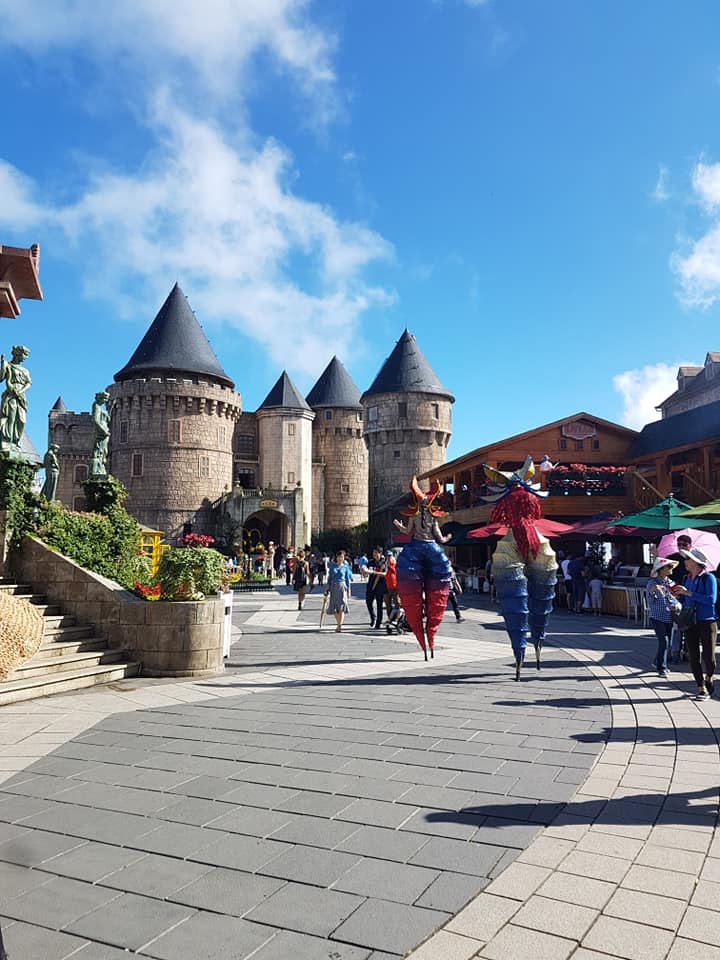 We stopped at a couple places for food but the options were so limited (I don’t eat meat) and the prices were pretty high. We ended up just going to a small cafe that offered personal sized pizza but when we got it, both of them were covered with raw onions, so gross. Mark can’t eat them cause he gets really bad heart burn and I just hate onions. We couldn’t even pick them off cause they were cooked right into the cheese. We were so frustrated and hungry and now worried that we would have to pay for something we couldn’t eat. I got up and told the waitress that we couldn’t eat onions cause we were allergic, there was NO WAY i was paying for these crappy little pizzas. I could tell she was hinting at making another pizza for us but I took advantage of the language barrier and pretended not to understand so we gave the pizzas back and didn’t have to pay. We enjoyed a couple cà phê sữa đá and decided to back down as it was 3pm, we were very hungry and also it was an hour to get back down to the parking lot and then an hour home and we didn’t want to end up having to drive in dark.

All in all, it made for a pretty cool day. If we had found out beforehand that the bridge was at an amusement park and that the tickets were 40$ each, we most definitely wouldn’t have gone. So I’m really glad that it worked out this way cause it was so much fun!