Im getting to the point now where I’m getting used to talking in 2-3 word sentences to people. After asking if someone speaks English, that’s just what you do, even if they say they speak English you still want to make it as easy as possible so you slow right down, enunciate dramatically and use only the truly important words like, “Toilet” or “Bus, how much?”. Today when we were waiting for the bus a lady walked up to us very timidly and quietly said, “Do you speak English?” When we said yes she literally threw her hands up in the air and said “oh my god yes!” Haha. Not that we could give her that much information but we sat and chatted with her and her husband until our stop enjoying the quick conversation between one another.

We ended up finding a free walking tour here in Marseille, so we were pretty excited to hear all about the oldest city in France. Our tour guide was a really nice guy named Eze. We got to experience so much today and visited streets and buildings we would be sure to miss or not even attempt to walk down if not with a tour group. Something really cool I learned was that there used to be a wall around the city and even though the city grew in population they never expanded the actual city so instead they started building homes into nooks and cranny’s of other buildings. For instance there is this really beautiful church but built into the front of it are homes that cover it almost completely. This makes the streets extremely narrow and not a lot of windows. Although cars still drive through them like normal.

It was pretty cool to see the oldest standing family home that was one of the 3 buildings in that area that survived the Nazis who decided to blow up the buildings. There was French revolutionaries living in that area and the Nazis couldn’t get their tanks through the streets so it was easier to blow them up to get to them instead. Hôtel de Cabre was built in 1535 and is still being lived in to this day. After the war during reconstruction of this road, wanting to widen the road, instead of demolishing this building it was actually moved in one single piece on jacks and rotated by 90 degrees to match the new street layout perfectly.

There is some pretty cool graffiti art all over the city as well and they do have a tour for it but unfortunately its only in French.

We got to finally go inside the Marseille Cathedral, a national monument of France. There are two cathedrals here, the old one sits directly beside it and is much smaller and most of it has been demolished. Built in the 12th century, the city wanted to bring more tourists and change the name of Marseille so they decided to build a bigger more extravagant one instead. This one was is called Nouvelle Major, a Byzantine-Roman style that building began in 1852 and finished in 1896. 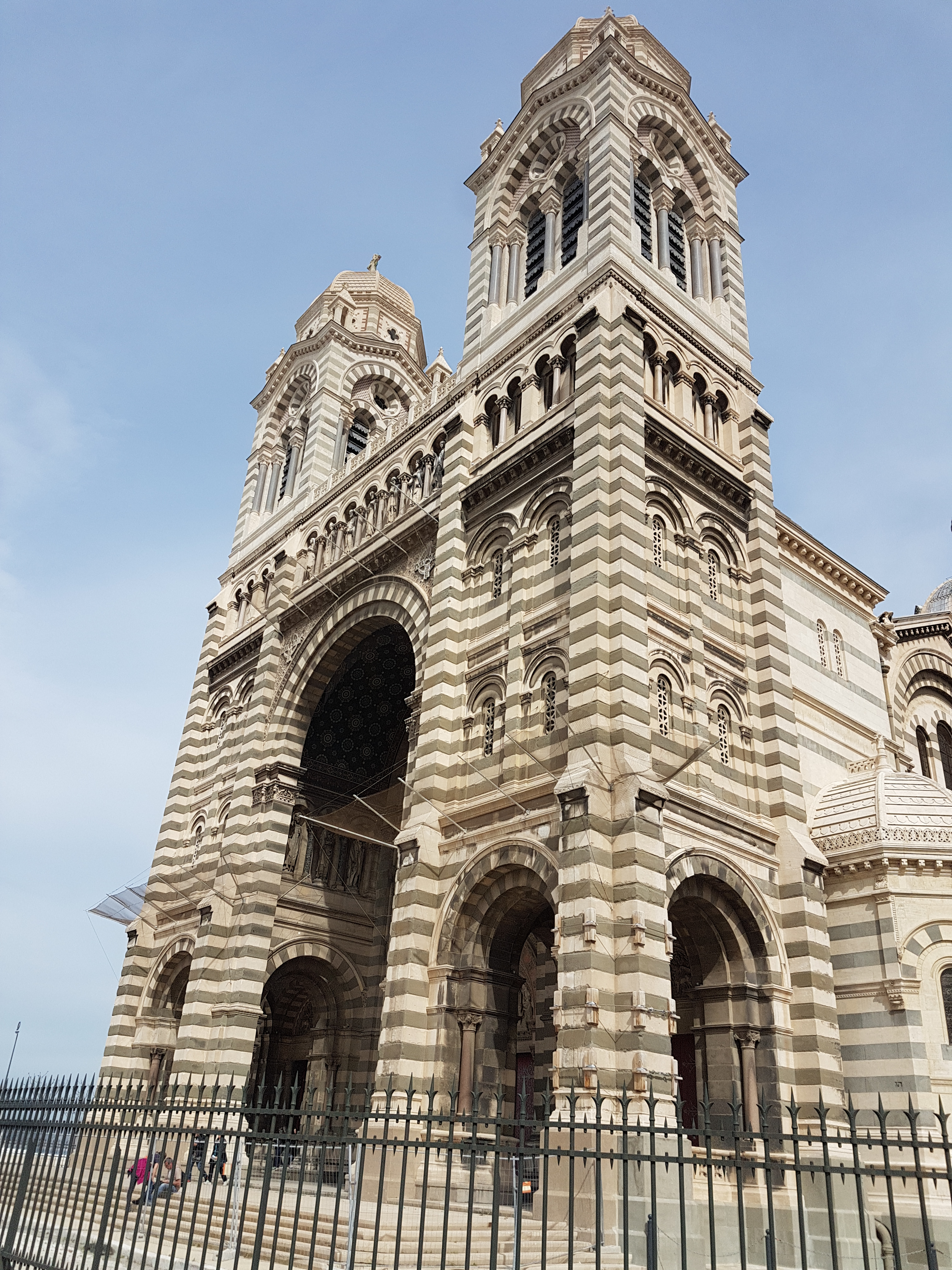 The interior is quite beautiful made of marble (they sure love their marble here in Europe) and has a capacity of 3000 seats. This is one of the largest cathedrals in France. Each flag strung up represents each region in France.

After the tour we caught the bus to Notre-Dame de la Garde, a catholic basilica and the building that dominates the skyline and towers atop a huge hill in the middle of the city and was the very first thing that caught my eye when we got off of the train on our first day. Such a gorgeous building with many view points and a 360 degree view of the entire city, each as stunning as the last place you were taking a picture. Unfortunately the museum was closed but we more so enjoyed walking around outside and getting our panoramic views of Marseille and breathing in that fresh Mediterranean air. Ahhhhhh… 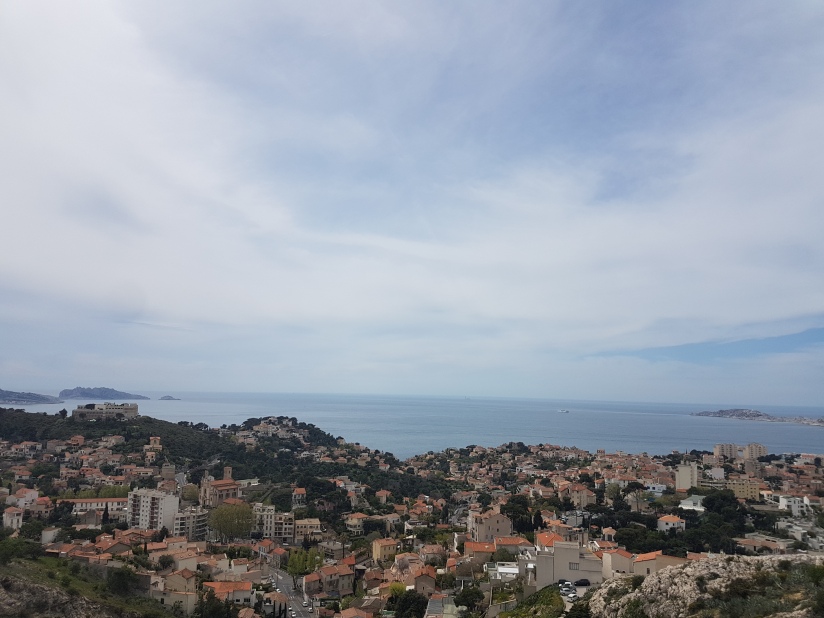 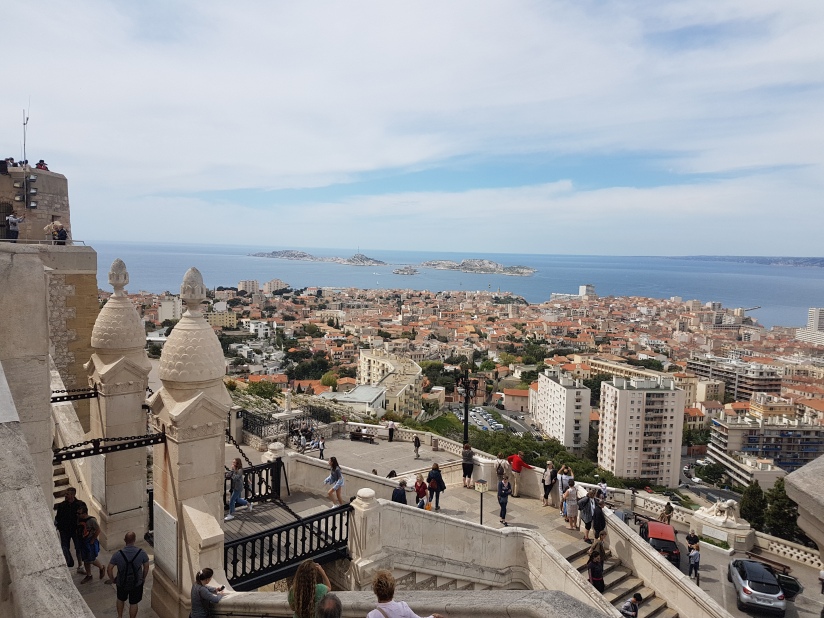 The interior is quite stunning and not what I had imagined. Almost this nautical theme going on.

All in all, another great day here in Marseille. I really do love this place. There is so much more to see and I love being able to explore it our own pace. We are already talking about having to head back to the rain soon in the UK but still have a few things to look forward to there! Marks family and of course the soccer game. Until tomorrow folks. So much love to all who are following along ❤