Wow, we sure butcher the French language and I’m not going to lie — its fun. I’m pretty sure its not pronounced zaco to melon but we had a lot of laughs saying this today when we were catching the zaco train to Melun. Grow up, right? Never.

Today was a pretty darn good day. We slept for almost 12 hours last night and woke up super refreshed and took our time getting ready to head out. We knew we wanted to be in the city at sun down so we didn’t want to leave too early. I feel like were just figuring out the transit system too, just in time to leave pretty much. We met up at St. Michel for a free walking tour with Sandeman. This company is so awesome for those travelers coming this way to Europe. I say free lightly cause although the tour itself costs nothing, you are expected to give a tip at the end based on what you feel the tour was worth. Pretty great for those on a budget, like us, and great to get around a new city, see all the sights without getting completely lost and learn some history. All in all it lasted about 2.5 – 3 hours and we absolutely loved it. This is my 4th tour with this company and every time is a great experience. Anywho…St Michel fountain is where we met. A gorgeous monumental fountain built in 1858. It depicts Arcangel Michael overturning the devil in the centre of the fountain and two dragons on either side. For some reason the water wasn’t running but it was still a beautiful sight.

We continued walking and ended up at the next stop, Notre-Dame. Which is one of my favourite cathedrals. This French gothic cathedral took 200 years to complete. Construction began in 1163 and finished in 1345. Some parts of the cathedral had to be replaced due to desecration during the French revolution in the 1790s and restoration didn’t start for this until 1991. Each stained glass window was hand painted which probably had a lot to do with the construction of this building. The interior is stunning and somewhat takes your breath away. I’m not really sure how to describe it so I will just show you some pictures instead. 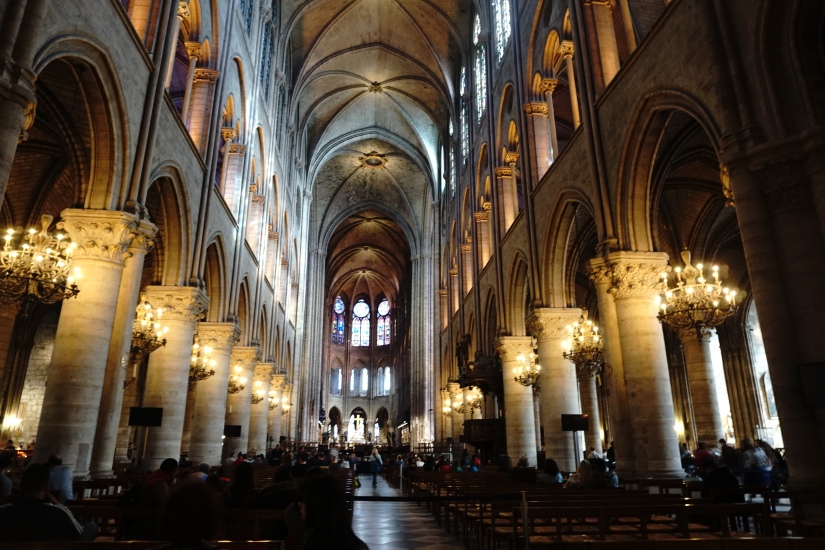 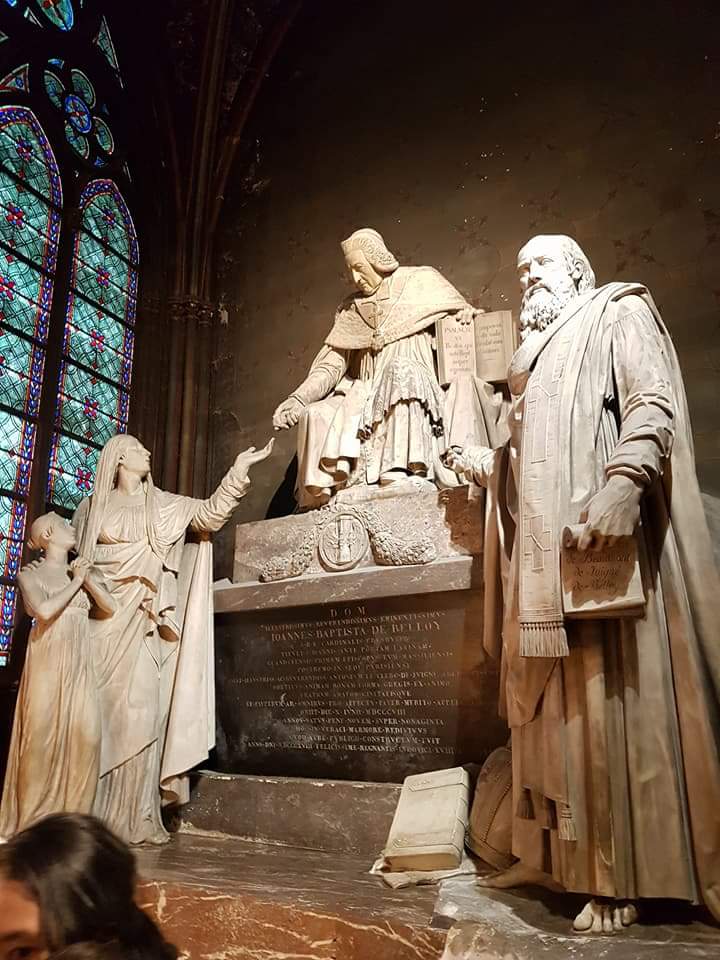 We got to see quite a few other stops around the city including the love lock bridge that doesn’t have any locks on it anymore. There were so many locks that the city had to begin cutting them off of the bridge. They ended up removing 45 tons worth of padlocks. Insane! The weight of the amount of locks was damaging the structure. They actually changed the bridge to plexiglass panels so locks could not be attached anymore, although it seems people just started doing it to the bridge right next to it anyways.

The next big sight was The Louvre. We of course didn’t go in but its pretty amazing to walk around the court yard outside. This is the worlds largest art museum and a historic monument. Inside is approximately 38,000 objects from prehistory to the 21st century spread out amongst 72,753 square metres. It is said to take around 9 months to see every single painting and object in the entire museum. You could walk 14kms in The Louvre and not retrace your steps!

We finished our tour at Tuileries Garden which is not to far past The Louvre. A gorgeous public garden filled with sculptures by leading artists and large fountains with people relaxing and sunning by. Its quite a sight and worth seeing for anyone who comes to Paris. 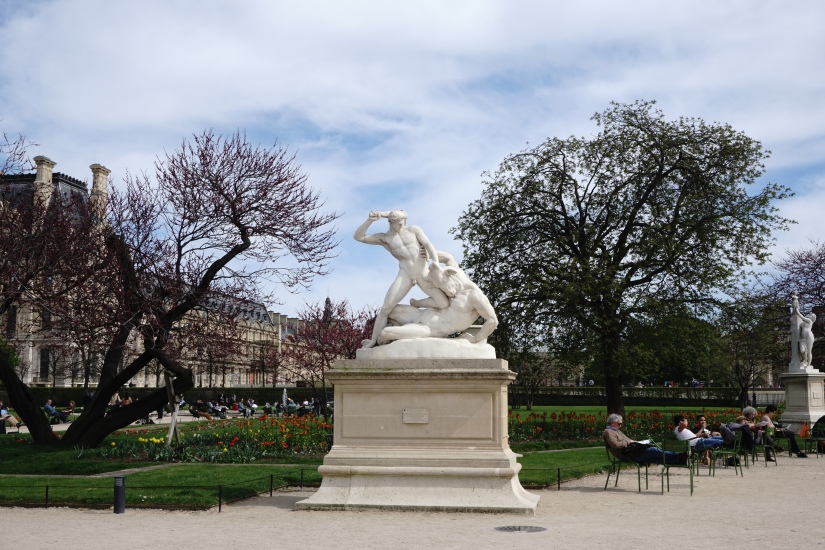 After the tour we headed out to grab some dinner to kill time. After supper we jumped on the train and made our way to the Eiffel Tower which I badly wanted to see at sunset and because it sparkles at night. We ended up at Jardins du Trocadero which is a garden right outside of the tower and great place to take photos. We sat around people watching for a couple of hours waiting for the sun to set. Lots of people selling Eiffel tower souvenirs as well as champagne and wine. It was quite entertaining. Once we saw that tower light up and sparkle it was all so worth it. I recommend to everyone coming here to see it at night. It is an absolute must see! Also the lines are much shorter later at night so its a better time to go up to the top. We did not do that today as we wanted to actually see the Eiffel Tower and not the city. 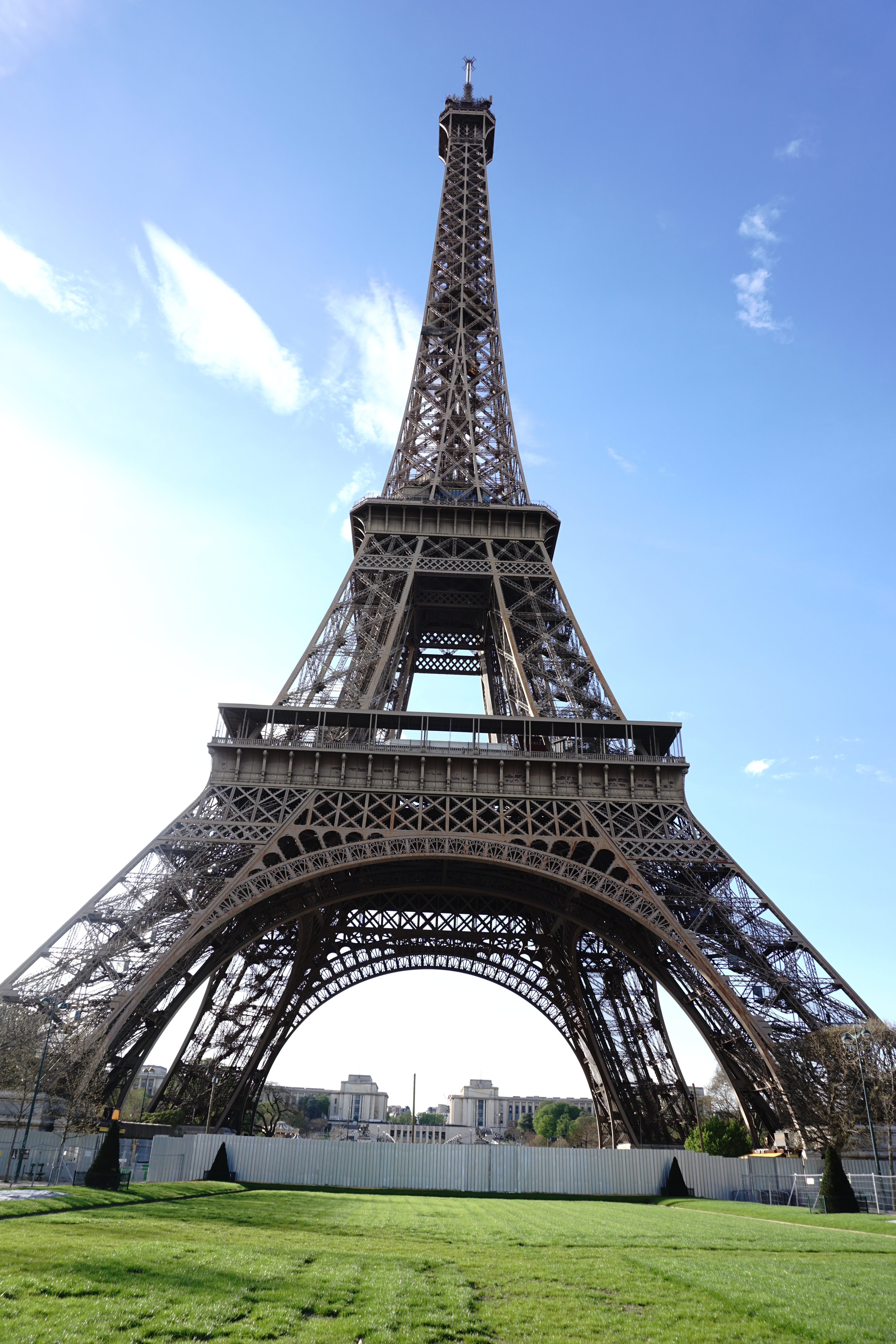 This was a pretty great way to end the night. Another long day so we headed home feeling pretty confident about our transit skills now, we high fived a little too early cause turns out the last bus we take finished at 10pm and we got there at 10:20. Dammit. Uber it is. Good night folks 🙂